The Kansas City chapter of Christian Youth Theater (CYTKC) was looking to rebrand and reposition itself as an independent entity. CYTKC approached Lundmark to aid in the creation and support of a new organization name, logo, color palette, language, and overall positioning.

When the organization had settled on a new name (First Act Theatre Arts), Lundmark then developed several logo variations, offering supporting language as well as visual examples of horizontal, vertical, and one-color logo designs for each. Once the client had selected a name and logo, Lundmark created a brand style guide to aid the organization in future partnerships. This document outlined typography, color palette, logo usage and limitations, as well as information about the organization and its mission.

The client was overwhelmed by the professionalism and expediency of the final product. Lundmark was able to be flexible in working with the client’s unique timeframe and offer expertise and guidance throughout their rebranding process. A key point in the client’s original request was for a name and logo that was timeless and appealing to all age ranges, and the final product certainly delivered on that key ask. The transition is still in progress, but early feedback of the rebrand has been wholly positive. 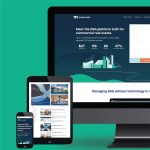